Sadie insisted, supported by the others, on letting the Tinkerbell movie DVD play over and over and over for more than two days. I noticed it went all through the “making of” parts in the process, and turns out Sadie was studying the art aspects of it. She was intrigued with how they created the characters.

Then this morning she demanded to paint.

They haven’t painted in months.

She draws amazingly, with a distinctive yet evolving style. She has never painted anything that was clearly something or shown the same talent as she has for basic pen drawing.

Using it as a bribe to get them to help pick up things, I set them up with their watercolors and off they went. I have a tiny rainbow and a princess in a multicolored dress she painted as well, but this was the first and most dramatic of the three things Sadie painted today. In keeping with the inspiration, it’s a fairy. Click for larger:

This was done in crayon, in a light color, but I resisted the urge to enhance or darken it. It’s one of her typical family of five drawings, but with bunny ears. This predates the miniature ink drawings I posted recently by a fair amount, while still being relatively recent. Instead of retouching, I include here a closer in image of the parental bunnies to make the best part of the picture easier to see. 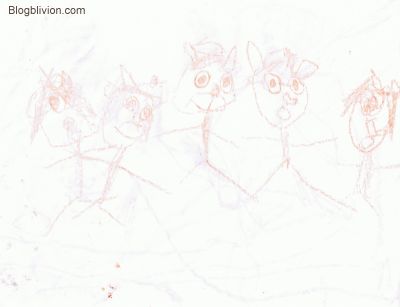 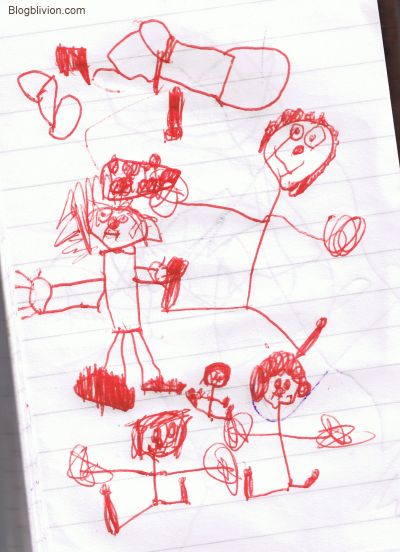 I’ve been meaning to scan and post some of Sadie’s drawings. Her current favorite is to use pen in a tiny notepad she carries around. I bet she’ll see pens and tiny notepads in her stocking, if not other art supplies among her gifts. Depends how strapped Santa feels, and that’s looking more so than ought have been the case.

Anyway, more to follow (and maybe a couple more recent kid pics off the camera in the past day), but this is one that particularly charmed me and made me go on the mission to scan selected notebook art. This is us: right to left me, Deb, Sadie, Valerie and Henry. It’s usually us. Which is why it’s cool that there’s one in which the 5th person is a neighbor holding a bowl of candy, while I am with the three kids at her door, taking them trick-or-treating. They are obsessed with trick-or-treat now. Not sure if that’s why Val is currently favoring the color orange where possible.

Anyway, here it is, actually larger than the original, and clickable for a bigger version. 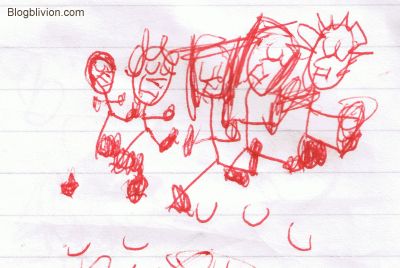 I scanned in two of Sadie’s latest drawings… 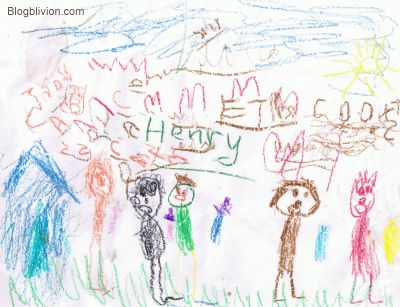 The top one is me handing her a lollipop.

The second one started as a blank on which I had written “Henry” and drawn a circle, before whatever interrupted my session with him. Starting with the circle, Sadie drew, left to right, herself with a pink sippy cup with a pink lid, Valerie with a pink cup with a purple lid, Henry with a blue cup with purple lid, Deb with a blue cup and me with a yellow cup. She drew the grass and our blue house, sun and blue sky, and, having seen me draw “m” birds exactly once when I’d have told you she was paying no attention, a bunch of birds. I think the rest was practice making letters, the extent of which I’d not noticed until I scanned it.

She’s done some cool stuff on the computer, more patterns and shades and stuff than identifiably drawn items, but mostly that gets blown away without being saved. I made her copies of these and put them on their computer (we have them sharing a single one now, rather than the overkill of three or even two, after Henry killed Sadie’s and Valerie’s started dying a natural death) so if she wants she can modify them there, or be inspired by them. She’s excited. I suspect Santa has in mind the possibility of a kid’s easel kind of thing for her this year, but we’ll have to see.

I bought them in 2007 for 2008, then rolled them over to 2009. You’re not supposed to be able to roll memberships over more than once, and I have no idea whether we’d be willing or able to go in 2010 and would rather have the money than ask to have them forwarded again, so I am offering them for sale.