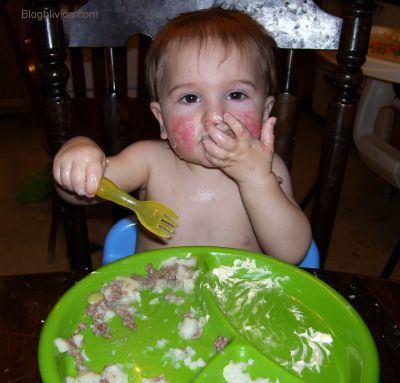 As mentioned previously, Henry has joined us at the table, and after about a week it seems to have stuck. In fact, he thought it was high time. It’s as if he’s always sat there.

It’s a little crowded, and tricky when the girls are eating something he can’t have, but we’ve done pretty well.

It’s astonishing just how much he loves chili, which in the last incarnations doesn’t seem to have bothered him at all. Other than spices and maybe brown sugar, that’s not a surprise, and any problem should have been modest anyway. More concerning is that one of us touched him without washing peanut butter off our hands and he got temporary, fairly dramatic hives where the presumed skin contact with peanut butter happened.

He has tried dried papaya with no apparent problem. Forget what else there’s been new. He thinks pasta is the greatest, even plain. Oh, he’s been eating a lot of homemade applesauce and some slivers of peeled Macintosh apple. Gave him slivers of raw carrot the other day. If I buy hot dogs (decent all beef ones, checking ingredients), he eats an entire one as part of a meal now.

We had an excess chicken breast thawed the other day, so I boiled it to make chicken salad the next day. Since he can’t have mayonaise, I made him some with canola oil, plus celery salt, garlic powder and poultry seasoning, which I also used in the other batch. He demolished a thick half-sandwich and it was sad I’d not saved him extra. I’ll have to try the oil trick with tuna, if there’s a sale and I can restock it. Looks like it’s one of those foods that’s gone up lately. The amount of oil is enough to moisten and make it act like it would with mayo binding it, but not enough to make it seem oily. Like an invisible binder.

More pictures sometime today, probably. Need to do stuff. It’s a weird day because I had a not-interview at 4:30 AM. That is, it was a see the operation and if you’re not scared then come apply for this part time, wee hours distribution center job. I napped subsequently, but not well. When Deb gets home, I’ll run down and apply, then it’s a background check, interview some morning at 2 AM, and presumably starting after that. Time to feed the kids, start a pot roast for supper in the crockpot, and do some other things that’ll feel useful.